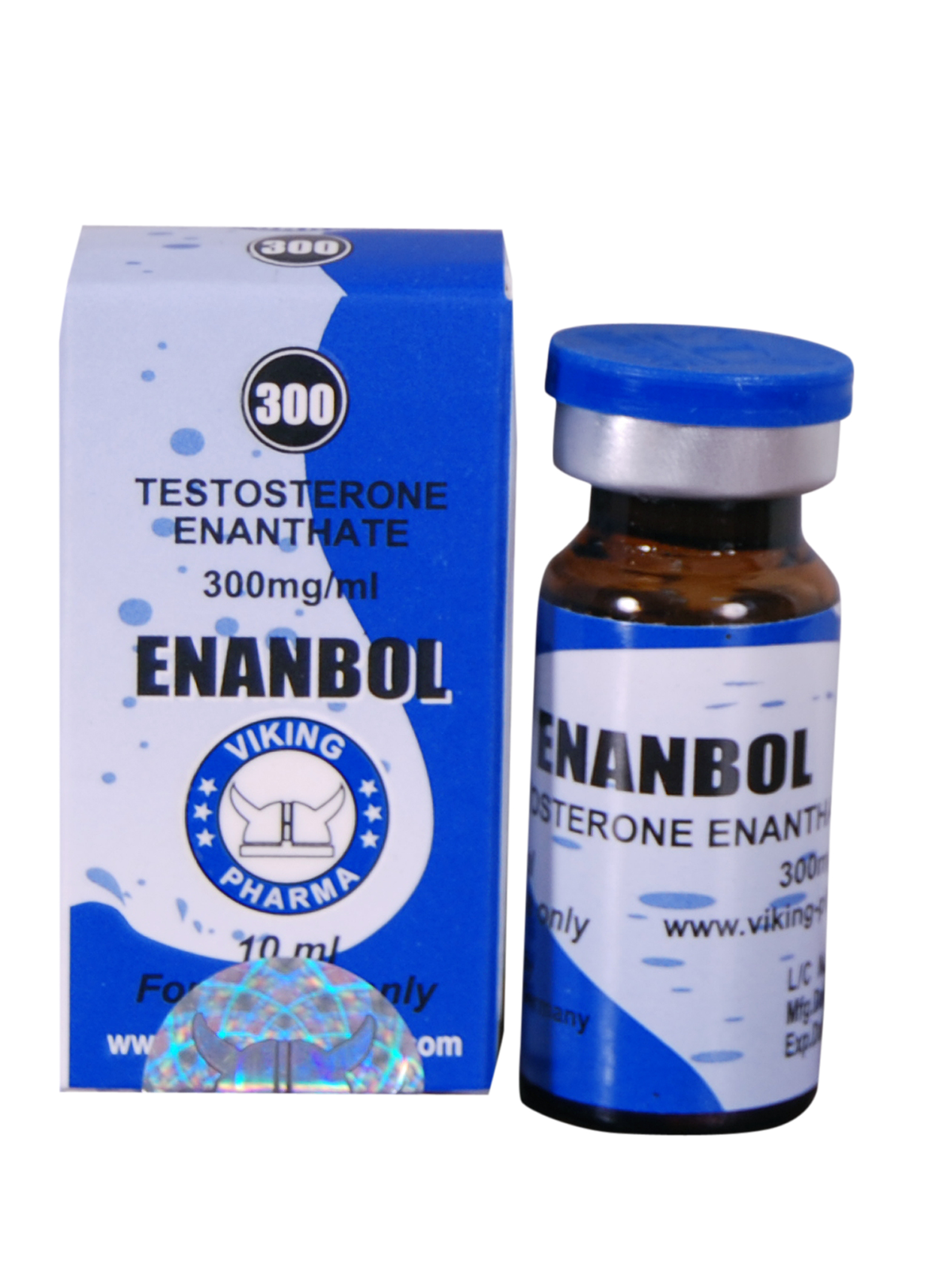 ENANBOL 300
Testosterone Enanthate a long acting form of the parent hormone testosterone. In this particular case, the parent hormone has been attached to the Enanthate ester to delay its release into the bloodstream over several days. Background Testosterone was first synthesized by being isolated from an animal source in 1935. Many different esters, including enanthate, have been attached to the parent hormone since then. Testosterone Enanthate is the most popular form of testosterone prescribed everywhere in the world except for the United States, where the very similar Testosterone Cypionate is typically preferred. The most common form of Tesosterone Enanthate (other then generic or underground) available in the United States is called “Delatestryl.” Steroid Action Testosterone exerts both genomic and non-genomic effects in the human body. This means that while many of testosterone’s effects are mediated by the androgen receptor, and gene transcription, many also occur without such stimulation. Testosterone promotes health and well-being, enhances libido, increases energy and promotes fat loss. It can also boost immunity. Testosterone aids in gaining and preserving lean muscle mass. It prevents against bone loss as well as heart disease. Testosterone Enanthate has a release time of between 8-10 days. It is typically injected once every one to three weeks, though some users opt for a twice a week frequency as well. This version of testosterone will cause the usual side effects associated with Testosterone, including: hair loss, acne, gynecomastia and eventual cessation of the body’s natural testosterone production. Many of these side effects can be associated (if not totally attributed) with the conversion of Testosterone into Dihydrotestosterone and estrogen. Technical Data Testosterone’s anabolic/androgenic effects are dependant upon the dose administered; usually the higher the dose, the better the results (1). In a study done on Testosterone Enanthate, a dose as high as 600 mg’s produced better results in subjects compared to those who received lower doses. The most fat was lost and lean body mass, strength and size was gained by the group who used the highest dose (600 mg/week), when compared to any of the lower doses studied (2). In the same study, HDL cholesterol was lowered and some acne was experienced by the subjects. There was roughly a 15% gain in Lean Body Mass from 20 weeks of 600mgs/week of testosterone enanthate. HDL cholesterol was also lowered and the subjects experienced acne. Overall, the most common effect reported by subjects using testosterone is gains in strength (3) and typically, testosterone is implicated in positive alterations in size, shape, and appearance of muscle (4). Due to stimulation of the Androgen Receptors (AR), accelerated muscle gain, fat loss, increased muscle repair and growth is experienced by those using injectable testosterone (5),(6). Testosterone can also binds to the AR on fat cells; therefore, adipose (fat) tissue can be broken down more readily and new fat formation is prevented (7). It is thought, therefore, that many of testosterone’s effects are receptor mediated; although many effects are also non-receptor mediated. While using injectable Testosterone Enanthate, since the body is building muscle at an accelerated rate, more foodstuffs are shuttled directly to the muscle tissue (this is known as nutrient portioning) and away from fat. This is another indirect effect of testosterone on fat loss. Testosterone also promotes glycogen synthesis, which is activated by insulin in response to high glucose levels (8), thus allowing someone using testosterone to more efficiently utilize food as fuel. User Notes Testosterone Enanthate is, to me, probably no different than testosterone cypionate (another long acting form of testosterone). It allows for once a week administration and can be found on the black market in doses anywhere from 200-500 mg/ml. Personally I have used this form of testosterone on many occasions. Although I prefer the shorter esters, Testosterone Cypionate is probably the cheapest form of testosterone that can be found on the black market, and that has influenced my choice to use it more than once. Water retention with testosterone enanthate often requires some kind of anti-estrogen to combat it (for me, anyway), although I seem to be able to handle pretty high doses without having any other problems with bloodwork or gyno. Most people will find that 500-1000 mg of this form of testosterone is going to be more than enough to build tons of new muscle. My own personal anabolic routine (doctor prescribed) rarely has me going over 500mgs of testosterone, and I typically feel that 750 mg is the upper limit of the acceptable risk/reward ratio, unless the user is in a profession where it’s necessary to do more (i.e. is a professional bodybuilder, etc.)