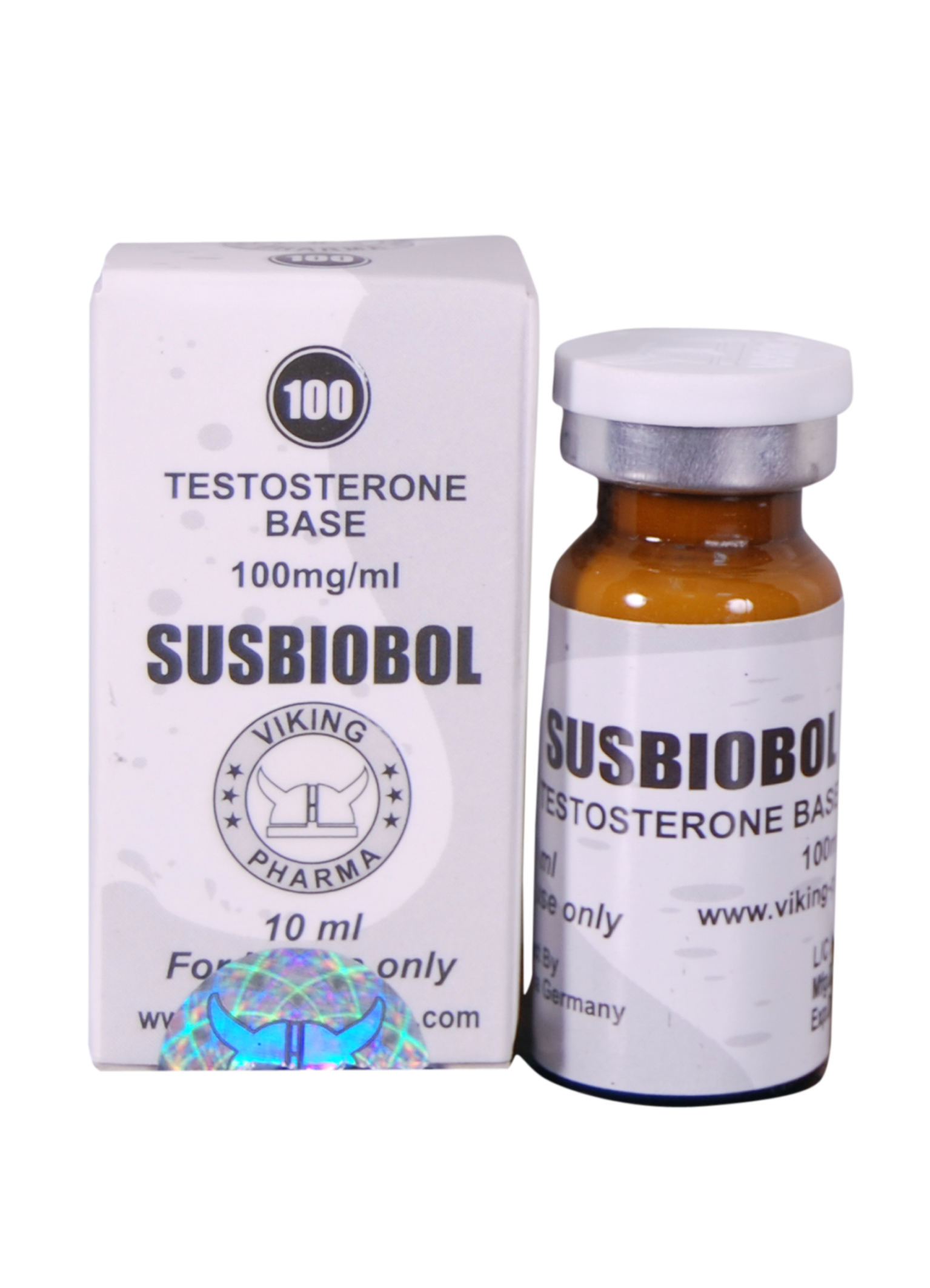 susbiobol 100
susbiobol 100 does not have an ester attached, making it a “pure” version of the parent hormone, Testosterone. Therefore, there is no ester to be accounted for in the weight. This means 100 mg of testosterone suspension contains 100 mg of the steroid. This makes it the most potent forms of Testosterone available. Gains come quicker and side effects much more possible with such a strong version of this hormone. Because testosterone suspension does not need to break down an attached ester (like other esterified versions) the hormone is effective immediately when administered. The users testosterone levels will be raised for only 2-3 days (at most) after injection and the steroid should be administered daily. This testosterone is dissolved in water typically, not oil like most of the other esterified versions making it more readily available in the body. Background Testosterone Suspension was the first anabolic steroid ever developed, in the 1930’s. It has been used as the most potent mass builder for decades. It was responsible for the Russian dominance in weightlifting not long after. In the United States, a very short acting version of Testosterone Suspension is available. The brand name for aqueous testosterone suspension is “Aquaviron.” There are only a few overseas versions available, including, the most popular, Testosus, which is manufactured in Australia. Testosus was recently replaced by a Mexican brand known as Anabolic-TS, which is the same steroid now sold under the label Grupo Comercial Tarasco (a Mexican distributor for Jurox). Univet Uni-test is the Canadian version of Testosterone Suspension. Many underground labs also suspend this variance of Testosterone (which is usually suspended in water) in propylene glycol or oil, making it a much more painful injection. Steroid Action The key role of Testosterone include: promoting health and well-being through enhanced libido, energy, immunity, increased fat loss, gaining and maintaining lean muscle mass, preventing Osteoporosis (loss of bone density) and possible protection against heart disease. Testosterone is also responsible for normal growth and development of male sex organs and maintenance of secondary sex characteristics. Secondary sex characteristics are specific traits that separate the two sexes, but are not directly part of the reproductive system, for example: chest and facial hair, a distinguished jaw line, broad shoulders and increased muscle mass. Testosterone binds to the Androgen Receptors (AR), which thus causes accelerated muscle gain, fat loss, and muscle repair and growth. These mechanisms are stimulated by activation of the Androgen Receptors (either directly or as DHT) Testosterone Suspension is the best-known potential mass builder, yet must be used with caution due its high risk of side effects. Often these effects are the result of the hormone being so readily converted with in the human body to a more androgenic form of itself, Dihydrotestosterone (DHT). Through aromatization, testosterone can also in-turn form estrogen (the female sex hormone). These potential side effects include: water retention, bloating, fat gain, gynecomastia (formation of breast tissue in males) and conversion to DHT (dihydrotestosterone) as well. Also, supplementing Testosterone will result in the shutting down of the body’s natural production of the hormone. The severity of these effects depends mostly on the levels and duration of circulating free testosterone. Testosterone’s anabolic/androgenic effects are dependant upon dosage, the higher the dose the higher the muscle building effect. Testosterone promotes aggressive and dominant behavior. Effective doses range from 350-1000 mg per week (50-140 mg/day). Technical Data Users of Testosterone Suspension reported rapid muscle growth and water retention. Increased aggression was also commonly reported with use of this specific type of Testosterone. Users found that Testosterone Suspension provided the best results when it was run for at least 8 weeks. More experienced users found they had better results when extending their cycle slightly longer (1). While using this hormone, endurance and strength increases were reported while following an intense training and workout routine (1-2). As with all of the Testosterones, the most common report by subjects using testosterone suspension was immense gains in strength (3). Alterations in size, shape, and appearance of the muscle were also reported (4). There was roughly a 15% gain in Lean Body Mass from 20 weeks of 600 mg/week of Testosterone therapy. (5) User Notes Most of the preceding information on testosterone suspension was actually about testosterone in general or other esters. Why? Well, medically, there is nobody using testosterone suspension anymore. It’s considered a bit of an ugly drug by most of the medical community. It’s just straight testosterone suspended in water (or sometimes, with certain underground preparations in oil). As a result, it needs to be injected at least once a day, with some athletes preferring to inject it twice a day. Testosterone Suspension has a reputation for being used as a pre-game (or pre-workout) stimulant to increase aggression. I can attest to it being pretty useful for this purpose, actually, as can many pre-contest bodybuilders. In the end, though, not many people will base a cycle around testosterone suspension – it’s uncomfortable to inject and leaves some pretty odd looking bumps in the muscle while it’s still there. References Zhonghua Nan Ke Xue. 2003;9(4):248-51 J Clin Endocrinol Metab. 2004 Oct;89(10):5245-55 J Lab Clin Med. 1995 Mar;125(3):326-33. Am J Physiol. 1998 Nov;275(5 Pt 1):E864-712 Am J Physiol Endocrinol Metab. 2001 Dec;281(6):E1172-81